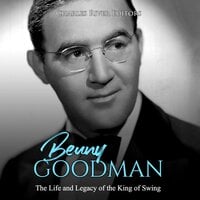 Benny Goodman: The Life and Legacy of the King of Swing

“After you've done all the work and prepared as much as you can, what the hell, you might as well go out and have a good time. ” – Benny Goodman

Sprightly swing music spills across the dimly lit club. The grayish curtains of cigarette smoke part every once in a while to reveal a sparkling stage and tables upon tables of patrons, some incurably inebriated and others high on the fast-paced nightlife. Fabulous flappers in shimmery cocktail dresses and stylish feather headbands throw their hands up and stomp their feet to the addictive beat on the dance floor. Smartly dressed men, their hair neatly parted and slicked back, toss fistfuls of dice onto the plush green baize of the craps tables. Some hover over roulette wheels, staring intently at the spinning flashes of silver, while others finger their playing cards as they sip on tumblers of whiskey, eyeing both the river and the tower of tokens next to them.

Frisky tunes, chic fashion, and American gambling are nostalgic, rose-tinted images most choose to project when visualizing the Roaring Twenties, but the other side of the coin brought an uninviting, much harsher reality that most would prefer to sweep under the rug. The first real estate bubble was on the brink of bursting, and progress was evident, but painfully slow, which gave way to yet another era of violent riots, lynchings, and other forms of oppression imposed on minorities.

When the phrase “the King” is used in the context of American music, most people think of Elvis Presley, but Presley was just a baby when the title was first conferred upon Benny Goodman as the King of Swing in 1935. The Swing Era was a magical period in American history between the hedonism of the Roaring Twenties and the rebelliousness sparked by rock music beginning in the 1950s. Swing music was rooted in ragtime, blues, and jazz music that had long been popular in African American enclaves in Chicago, St. Louis, Kansas City, and New Orleans. Swing took the entire nation by storm thanks in large part to Benny Goodman and his bands, earning Goodman the nearly undisputed title of the King of Swing.

Goodman's life was a genuine rags-to-riches story. The son of nearly destitute Jewish immigrants from Eastern Europe, Goodman was a musical prodigy who began playing professionally at the tender age of 13, and he was also among the first mainstream bandleaders to hire black musicians. Referring to music as “a great escape for me from the poverty, " Goodman’s lifelong focus was on good music, no matter who it came from. As he put it, “If a guy's got it, let him give it. I'm selling music, not prejudice. ” Goodman’s popularity was so instrumental that Lionel Hampton went so far as to claim, "As far as I'm concerned, what he did in those days—and they were hard days, in 1937—made it possible for Negroes to have their chance in baseball and other fields."

Apart from a few hiatuses to tend his health and his growing family, Goodman remained a consistently active musician literally right up until his death in 1986 at the age of 77. Somewhat fittingly, he died in his study with his clarinet next to him and a Brahms sonata on a music stand nearby.

Benny Goodman: The Life and Legacy of the King of Swing profiles how Goodman rose from obscure beginnings to become one of 20th century music’s most influential figures. Along with pictures of important people, places, and events, you will learn about the King of Swing like never before.