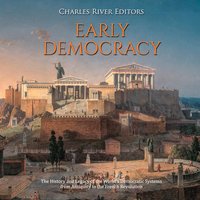 Early Democracy: The History and Legacy of the World’s Democratic Systems from Antiquity to the French Revolution

In today’s modern world every political regime, even the most authoritarian or repressive, describes itself as democracy or a Democratic People’s Republic. The concept of rule by the people, on behalf of the people, has come to be accepted as the norm, and very few would overtly espouse the cause of dictatorship, absolute monarchy or oligarchy as the most desirable political system upon which to base the government of any country.

It is also generally accepted that democracy, as a political ideology, began in Greece, specifically in Athens, in the 7th century BCE and reached its zenith in the 5th century under the leadership of Pericles. Dating an exact starting point is impossible, but at the beginning of the 7th century BCE, Solon inaugurated a series of reforms that began the movement away from rule by individuals, or tyrants, and by the end of that century the reforms of Cleisthenes provided the basis of the Athenian democratic system that culminated in the radical institutions introduced by Ephialtes and Pericles in the 5th century. The result was the first, and possibly only, truly participative democratic state.

Of course, not every inhabitant of Athens enjoyed the right to vote. Only full citizens could do that, and they represented approximately 30% of Athens’s male population, numbering between 30,000 and 60,000 during Athens’ Golden Age and declining rapidly throughout the Peoloponnesian War. The remainder was made up of metics and slaves, who vastly outnumbered free citizens and, indeed, almost all other slave populations in Hellas, a fact which the Athenians often conveniently chose to forget when singing the praises of their democracy.