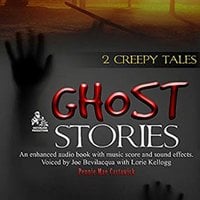 "Silence be Damned"
Leo peered up at her, eyebrows raised. "Lydia. What's wrong?" She kept screaming over and over. "You're...you're bleeding.... Lydia felt her hands balling involuntarily into fists, and she felt a new round of screaming building inside her. Leo glanced down at his shirt. His eyes grew as large as dinner plates. "Oh my God....what is that?"

This never-before-published narrative is a disturbing, nightmarish tale of a lady named Lydia and her journey through a busy subway train station when things quickly begin to change. Something menacing awaits down there, a monstrous and punishing supernatural force that comes to life, but be warned, this story is not for the faint of heart.

"The Exchange"
Luke walked up to the girl in the playground and asked, "Why aren't you swinging?" The girl looked at him and said nothing for a minute. He was struck by the darkness of her irises, which were almost impossible to distinguish from her blacker-than-black pupils. He swallowed. He was about to turn away when she said, "I was swinging, but I don't swing anymore."

A ghostly tale of a boy that moves to a new house with her mom and sister, his father had recently died. He encounters a small girl in the playground up the street where he lives and then the spine tingling terror begins....