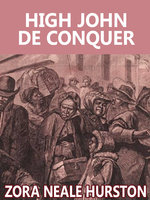 "Maybe, now, we used-to-be black African folks can be of some help to our brothers and sisters who have always been white. You will take another look at us and say that we are still black and, ethnologically speaking, you will be right. But nationally and culturally, we are as white as the next one. We have put our labor and our blood into the common causes for a long time. We have given the rest of the nation song and laughter. Maybe now, in this terrible struggle, we can give something else—the source and soul of our laughter and song. We offer you our hope-bringer, High John de Conquer."

Zora Neale Hurston (1891-1960) was an influential author of African-American literature and anthropologist, who portrayed racial struggles in the early 20th century American South, and published research on Haitian voodoo. Of Hurston's four novels and more than 50 published short stories, plays, and essays, her most popular is the 1937 novel Their Eyes Were Watching God.

Originally published in The American Mercury (1943).