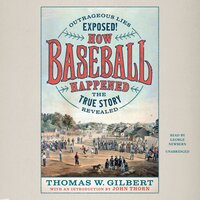 The fascinating, true, origin story of baseball—how America’s first great sport developed and how it conquered a nation

Baseball’s true founders don’t have plaques in Cooperstown. The founders were the hundreds of uncredited amateurs—ordinary people—who played without gloves, facemasks, or performance incentives in the middle decades of the nineteenth century. Unlike today’s pro athletes, they lived full lives outside of sports. They worked, built businesses, and fought against the South in the Civil War.

But that’s not the way the story has been told. The wrongness of baseball history can be staggering. You may have heard that Abner Doubleday or Alexander Cartwright invented baseball. Neither did. You may have been told that a club called the Knickerbockers played the first baseball game in 1846. They didn’t. You have read that baseball’s color line was uncrossed and unchallenged until Jackie Robinson in 1947. Nope. You may have heard Cooperstown, Hoboken, or New York City called the birthplace of baseball, but not Brooklyn. Yet Brooklyn was the home of baseball’s first fans, the first ballpark, the first statistics—and modern pitching.

Baseball was originally supposed to be played, not watched. This changed when crowds began to show up at games in Brooklyn in the late 1850s. We fans weren’t invited to the party; we crashed it. Professionalism wasn’t part of the plan either, but when an 1858 Brooklyn versus New York City series accidentally proved that people would pay to see a game, the writing was on the outfield wall.

When the first professional league was formed in 1871, baseball was already a fully formed modern sport with championships, media coverage, and famous stars. Professional baseball invented an organization, but not the sport itself. Baseball’s amazing amateurs had already done that.

Thomas W. Gilbert’s history is for baseball fans and anyone fascinating by origin stories and American culture.