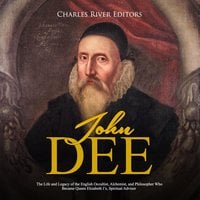 John Dee: The Life and Legacy of the English Occultist, Alchemist, and Philosopher Who Became Queen Elizabeth I's Spiritual Advisor

With the golden glow of the candlelight kissing his cheeks, he hovered over a spirit mirror, a flat, exquisitely lustrous “shew-stone” fashioned out of raven-black obsidian. Gazing intently upon his reflection in the dark volcanic glass, he chanted in hushed tones as he ran his fingers across the engravings on the oat-colored wax wheel next to him, the Sigilla iEmeth, which featured a septogram and runic carvings and symbols in minuscule print. Contrary to what one might expect, it was not a phantom, hobgoblin, or demon that he sought, but rather, the seraphic voice, and perhaps even the face of an angel – the one bridge between mankind and their Creator, one who holds the key to all of life's unanswerable questions.

Was this man delusional? Perhaps so, but perhaps not. But there was no question among those on hand that this was not an ignorant, philistine, unlettered buffoon of a man who readily boarded the train of groundless superstition. Far from it, this was a man who held not only a master's degree, but a doctorate, and his simultaneously stimulating and mesmerizing lectures drew crowds of royals and nobles from near and far. This was a man who was well-versed in a host of academic fields, and he would go on to serve as one of his queen's foremost personal advisers. He was also a prolific author whose revolutionary ideas helped charted the path for the burgeoning British Empire.

The man in question is none other than John Dee, one of the greatest scientific minds of his time, but also one of the most controversial. He was a learned man in fields as varied as mathematics and astronomy, centuries before they became formalized fields of study, but he is better remembered for performing magic and alchemy. Instead of astronomy, he became renowned across England for astrology, and he was one of the country’s most notorious occult writers during his life.