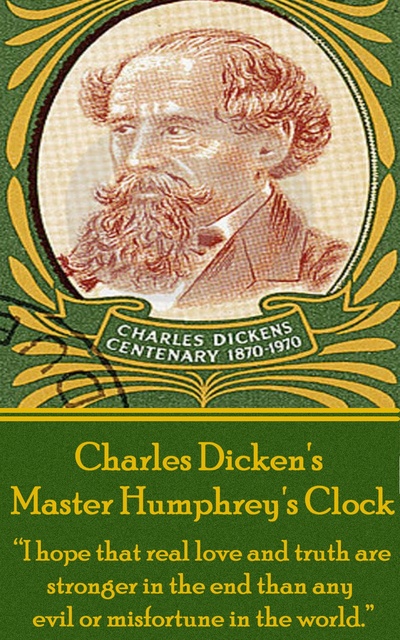 Master Humphrey's Clock: “I hope that real love and truth are stronger in the end than any evil or misfortune in the world.”

Master Humphrey's Clock: “I hope that real love and truth are stronger in the end than any evil or misfortune in the world.”

Master Humphrey's Clock was originally a weekly magazine published by Charles Dickens between 1840 and 1841. The collection includes a number of short stories in addition to two novels: The Old Curiosity Shop and Barnaby Rudge. The eponymous character, Master Humphrey, is the most important narrator in all this series of stories, but not the only narrator. He starts the narrative by introducing himself. He is a crippled man who lives alone and who is fond of storytelling. He has a circle of friends who share the same hobby. They include a merchant, a deaf gentleman and Mr. Pickwick. They all organize weekly meetings at Master Humphrey's to read stories aloud and discuss them. The clock of the title is situated at the center of Master Humphrey's table around which the group sit. Another character named Mr. Weller decides to run another storytelling club in the house's kitchen and gathers around him the house's maid and a barber, among others. This mirror club is called Mr. Weller's Watch. In Master Humphrey's Clock, some of the characters reappear in different stories, like Mr. Pickwick. Besides, some of these short stories serve as frame narratives for other stories, which explains the importance of having the series published together.