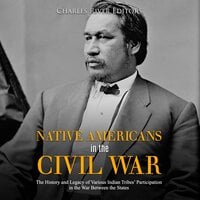 Native Americans in the Civil War: The History and Legacy of Various Indian Tribes' Participation in the War Between the States

By far the most important element in the Civil War from a native standpoint was what happened in and to Indian Territory, now part of the state of Oklahoma. There was a parallel civil war in Indian Territory, with the Cherokee nation splitting in two. While the 100,000 inhabitants of Indian Territory represent most of the experiences during the Civil War, many others were affected by it all over the country.

In fact, men from more than two dozen tribal peoples actively participated in the Civil War by fighting for one side or the other. There were full-size Indian regiments fighting for the Confederacy, and full-size Indian regiments fighting for the Union. Indians joined sharpshooter regiments, functioned as scouts, piloted Union ships, and served as guerrillas, while some joined units of United States Colored Troops. Recent estimates are that more than 28,000 Indians served as Civil War soldiers. One difference between Confederates and Union Indian troops is that Confederate Indian units were generally officered by Indians, and Union formations were usually led by white officers, but some Indians in the Union forces did eventually work their way into command.

Some 10,000 Indians are thought to have died in Indian Territory as a result of the Civil War, including soldiers, but also as a consequence of a total breakdown of law and order and chronic guerilla war. That estimate could be low, because the Cherokee population alone dropped from 21,000 before the Civil War to 15,000 after it. While Indian Territory was the main stage in American Indian participation in the Civil War, it was not the only element. The Iroquois in New York produced a few hundred Union troops who served mostly with Pennsylvania units, and Ely Parker, who was General Grant’s secretary and who drew up the terms for Lee’s surrender at Appomattox, became a brigadier general, making him the only Indian Union general.