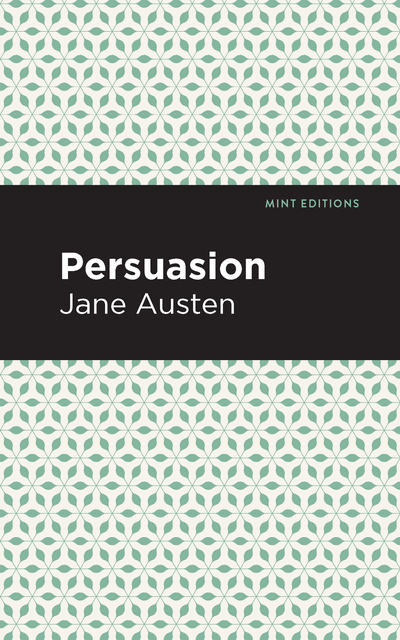 Persuasion (1817) is the final novel written by English author Jane Austen—and the first to be attributed to her name. Persuasion was published posthumously to widespread critical acclaim, and has since been recognized as an understated and mature work of fiction from one of history’s finest writers. Like most of Austen’s novels, Persuasion involves an intricate network of characters and relationships, illustrating its author’s peerless attention to the inner workings of aristocratic society and the nuances of human communication.

Persuaded by her wealthy family to break off her engagement to the young Frederick Wentworth, Anne Elliot finds herself unmarried nearly eight years later. By now, with the Elliot family all but ruined by the spendthrift Sir Walter and his enabling daughter Elizabeth, the prospect of marriage is not only a distant hope for Anne, but a bitter reminder of what could have been. When chance reunites her with Frederick, now the esteemed Captain Wentworth for his accomplishments in the Napoleonic Wars, she will have to navigate feelings both old and new with the reversal brought on by their opposing fortunes. As the two are drawn closer together, they will have to decide if it is possible to rekindle a love that has lain dormant much longer than their engagement was allowed to last.


Jane Austen’s Persuasion is a perceptive and entertaining novel that raises timeless questions regarding the inequity of social life, the disparate opportunities available to men and woman, and the indomitable feelings which work to draw them together—and threaten to drive them apart.

With a beautifully designed cover and professionally typeset manuscript, this edition of Jane Austen’s Persuasion is a classic of English literature reimagined for modern readers.