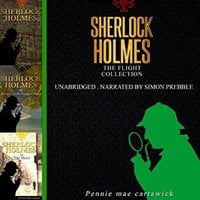 Three Compelling Sherlock Holmes Mysteries In One Book. Narrated by the celebrity actor Simon Prebble who is also known as an award winner for the best voice in fiction.

Story One: "The case of the missing Mayan Codices".
"I do not suppose that you have brought your revolver with you Watson?"I shook my head to indicate that my response was in the negative to his question. He turned his head forward again and led us through the kitchen, past several side pantries. As we cautiously inched forward, Holmes observed that the blood trail consisted of droplets of varying size. "Whomever it came from, they must have been applying intermittent pressure on the wound as they walked. "

Story Two: "Murders on the Voyage to India".
Murder; "Murder. " The scream echoed down the hallway shaking me from my slumber and into the dim vision of the electric lights. Someone was banging on the door and Watson scrambled to open it. I was bleary- eyed, still feeling a bit desensitized when Evelyn Reed burst in to the door. Her hands were covered with odious red, and tears streaked across her reddened face. "There's been a murder!" She repeated.

Story Three: "The Heist".
"Gentlemen, I am here to represent the interest of Henry Bank and Trust. We would like to resolve the situation quickly and quietly, so that all the investors can move forward with a minimum of anxiety. " Holmes sat across from her, studying her with a nonplussed air. "I must admit" he said, "that I do not know how to assist you. Inspector Lestrade was here earlier, and it appears that you are missing nothing and they have no thieves in custody. When the bank emptied today, everything was in place, except for the criminals. "