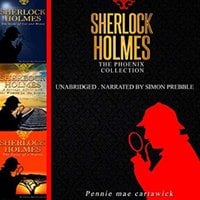 Three Compelling Sherlock Holmes Mysteries In One Book. Narrated by the celebrity actor Simon Prebble who is also known as an award winner for the best voice in fiction.

Story One: "The Game of Cat and Mouse".

"The interior was dark, and neither of us searched for a lamp or switch. There came a ticking of some clock or another. And the sound of a dripping faucet somewhere in the house was like a hammer to an anvil. Our breaths were loud, but my heart sounded louder to me. Interestingly enough, Holmes moved as though he'd been through here before. I had no time to ponder this as somewhere behind us, I heard a door shut and then the click of a lock."

Story Two: "A Strange Affair with the Woman on the Tracks".

"Jane screeched at this further betrayal and went for Henry. They began to struggle. Henry was the stronger out of the two, yet the woman's pain was unstoppable. His hands wrapped around her throat and Jane clawed at his face until she fell. She lay there, across the tracks, and was quite still. Mrs. Cavell gasped in shock and Henry ran past us back to the train. We stared down at Jane's body…"

Story Three: "The Curse of a Native".

"Adams had violently slapped Kimilu so hard that the sheer force had floored the waiter and the usually humble waiter had lost it. He had stood up and angrily talked back at him in his native language, which Adams did not understand. But Butler had lived in Africa for over two decades and he understood every word. His translation was confirmed by other native workers who witnessed the drama. It was chilling to say the least."