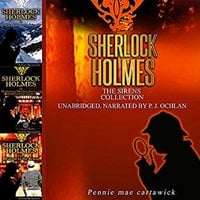 Story One: Bumbling Caper on the Swiss Alps.
"Watson! Watson!" I shouted in dismay, thinking I was close to the surface. Alas, I could not find my way out of the snow, packed thick and heavy all around me. My legs were pinned in place, and I could scarcely breathe with each passing moment.

Story Two: Mysterious Murders Surround the Whistling Tavern.
He must have had a defective heart, but science has yet to advance to the point where we can make these determinations before the inevitable V-incision is made. More curious than these points, however, was the fact that these bite marks were highly uncharacteristic of any man or beast. Though they showed evidence of the same layout of teeth that is apparent in the human mouth, the proportions and spacing of the teeth were far larger than standard.

Story Three: Watson to the Rescue.
The woman nodded, coughing softer this time, and looked up at him. "You don't want to be fiddling around in the pirate business, Mr. Holmes… " she said quietly, raising her eyebrows. My companion inhaled sharply, a deep staccato, then exhaled just as rapidly. "I do not think you understand, Ms. Pensey. This involves the death of an innocent boy, one I've seen around here, and this marking, the one that surely intended his unmerited demise.