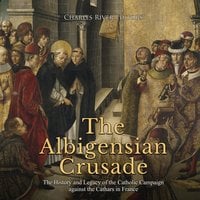 The Albigensian Crusade: The History and Legacy of the Catholic Campaign against the Cathars in France

After the fall of the Western Roman Empire in the 5th century, when Western Europe was governed by a Germanic warrior-caste, the theory of a just and virtuous war took root. The Roman Church enhanced its authority by sanctifying oaths taken for just military purposes, and Bishop Anselm of Lucca (d. 1086) was the first to suggest that military action for the cause of religion could remit sin. At the Council of Clermont in July 1095, Pope Urban II canonized religious war by urging Western Europe's nobility to take up arms in defense of the Byzantine Empire against the Muslims, thus launching the Crusades. Religious military orders such as the Knights of Saint John, the Templars, and the Hospitallers arose, ostensibly founded to protect the weak and the sick but also to extend the boundaries of Christianity and the power of the Church. In Europe, the knight, originally a mounted warrior, became a consecrated soldier of Christ, dedicated to the defense of the Church by solemn vows made before an altar.

It was not long before the concept of the holy crusade was applied beyond the holy land. The conflict between the Christian states and the Muslim Moors in the Iberian Peninsula became a holy war, as did the forced settlement of Pagan Slav lands on Germany's eastern frontier. At the beginning of the 13th century, the Knights Hospitaller and the Knights of Livonia began the conquest of heathen Baltic lands while Sweden invaded Finland.

Naturally, the question remained concerning the use of arms against other Christians. Eastern Christians did not acknowledge the Pope's supremacy, and many held that it was lawful for him to declare a crusade to bring schismatics back to the obedience of Rome. When the “heresy” of Catharism began to take root in southeastern France toward the end of the 12th century, both Church and State considered the use of force to extirpate it.