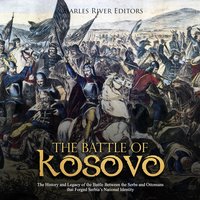 The Battle of Kosovo: The History and Legacy of the Battle Between the Serbs and Ottomans that Forged Serbia's National Identity

Given how tightly the Serbs have historically been clinging to the Battle of Kosovo, which was fought on June 28, 1389, on the Kosovo plain in southern Serbia against the fledgling Ottoman Empire, it’s somewhat surprising what actually happened there. There can be no doubt that it is regarded as an important and indeed iconic battle in European history, but at first glance, it is difficult to see why. Though neither side fielded more than 40,000 men, it was a bloody battle that all but spelled the end of the Serbian nation.

The Ottoman Sultan Murad I arrived backed up by a neighboring beylik from Anatolia, and together they faced the Serbian Prince Lazar, together with allies from Kosovo and Bosnia. As some sources claim, it is also likely that the Knight Hospitaller from Croatia fought on the Serbian side, and anachronistic records state that the Serbian army was larger than Murad’s. Murad had both his sons with him, Bayezid and Yakub, commanding one wing each.

Initially, it looked like the Serbs would prevail, and the Ottoman forces conceded heavy losses during the first hours. However, in a frenzy of bloodthirst and revenge, Bayezid led his wing in a counterattack towards the knights, whose heavy armor became a hindrance for their retreat. Bayezid slaughtered a great number of the Serbian soldiers, and Prince Lazar’s ally, Vuc Branković from Kosovo, fled the field trying to rescue as many men as possible. At this point, Prince Lazar had probably been captured or killed in the heat of the battle.