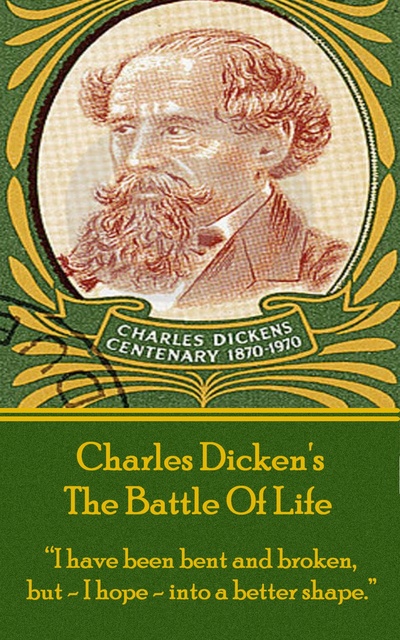 The Battle Of Life: “I have been bent and broken, but - I hope - into a better shape.”

The Battle Of Life: “I have been bent and broken, but - I hope - into a better shape.”

Having for a subtitle “A Love Story,” The Battle of Life is one of Charles Dickens’s Christmas Books which was first published in 1846. Like other Christmas stories, The Battle of Life has a happy ending though without the employment of any religious themes or supernatural effects. It follows the life of a happy family composed of a father named Dr. Jeddlar and his two daughters Grace and Marion. Dr. Jeddlar also has a ward named Albert Heathfield who is in love with Marion and hopes to marry her. When Albert leaves the village to continue his studies, Marion is believed to be seduced to elopement by an infamous man in the village. After retuning and learning the story, Albert is deeply grieved. However, he soon develops a romantic relationship with the older sister Grace and ends up marrying her. On the birthday of their first daughter that they decided to name Marion, Grace’s sister visits the family after a long absence. She declares that she never eloped, but only left to live with an aunt in order to leave Albert for her older sister. The story culminates in a warm scene in which the family is happily reunited.