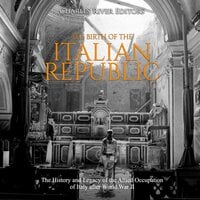 The Birth of the Italian Republic: The History and Legacy of the Allied Occupation of Italy after World War II

On March 25, 1957, Italy signed the Treaty of Rome, which established the European Economic Community (EEC), a forerunner of the European Union (EU) that was promoted as a guarantor of future peace in Europe. For the soldiers on both sides of World War II fighting each other 13 years earlier in the mountains around Monte Cassino, south of Rome, this would have seemed a highly improbable outcome.

Despite British diplomatic efforts, Italy had joined the Axis in 1940 with the intention of expanding its African empire and reliving the glories of Ancient Rome. That proved to be a major mistake, and by the spring of 1943 Italy had lost all its African possessions. The Axis’ North African defeat opened up the possibility of taking the war in the west to the European continent for the first time since France's lightning conquest by the Wehrmacht in 1940. The British and Americans debated the merits of landing in France directly in 1943, but they ultimately opted against it. The Soviets railed at the Westerners as “bastards of allies” – conveniently forgetting that they aided and abetted Hitler's violent expansionism in eastern Europe for over a year, starting in 1939 – but a 1943 “D-Day” style landing in France might have proven a strategic and logistical impossibility.

As the Allied armies advanced, but the four main players in the contest for the post-war destiny of Italy had already been established; all of them heavily influenced by international ideologies. The fascists were loyal not only to the RSI but to Nazi Germany and wider fascist ideology. They were opposed by numerous mainstream parties of whom the Democrazia Cristiana (Christian Democrats, DC) quickly became the most important. These parties were loyal to a mixture of the liberal values of pre-fascist Italy and the ideologies of the USA and Britain. The third major force was the Catholic Church.