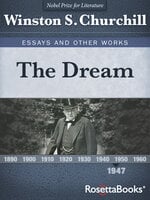 A powerful, emotional short story from the prime minister and Pulitzer Prize–winning author, detailing a conversation with the ghost of his beloved father.

Legendary politician and military strategist Winston S. Churchill was a master not only of the battlefield, but of the page and the podium. Over the course of forty books and countless speeches, broadcasts, news items and more, he addressed a country at war and at peace, thrilling with victory but uneasy with its shifting role in global politics. In 1953, he was awarded the Nobel Prize for Literature for “his mastery of historical and biographical description as well as for brilliant oratory in defending exalted human values. ” During his lifetime, he enthralled readers and brought crowds roaring to their feet; in the years since his death, his skilled writing has inspired generations of eager history buffs.

In this rare work of fiction, Churchill imagines a visit from the ghost of his father, Randolph. Churchill reveals to his father all that has happened in the world since his death in 1895, leaving out one crucial detail: his own critical role in determining the unfolding of world events. His yearning for his late father shines through his terse, careful prose, lending emotional weight and nostalgia to this unusual foray into fiction.