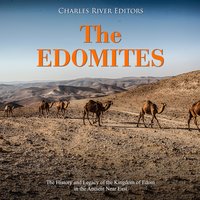 The Edomites: The History and Legacy of the Kingdom of Edom in the Ancient Near East

The ancient Edomites were just one of the many cultures inhabiting the Levant during the Late Bronze Age and early Iron Age, but they remain known thousands of years later thanks to mentions in the Old Testament. The Bible indicates that the Edomites and their kingdom had a complex relationship first with the Hebrews and then with the Israelites. According to the Bible, the Edomites were descended from a different branch of the Israelites’ family tree and as such were treated as “brothers” at times, but at other times they were sworn enemies.

Given those facts, understanding the true nature of the Edomites and their culture has been somewhat problematic for historians due to the lack of source material. Most of the references to the Edomites come from the Bible, which, while historically accurate about many points, is clearly biased against the enemies of Israel. Thus, scholars have also turned to texts from the Egyptians and Assyrians and excavations from the Levant to form a more comprehensive image of a culture that in many ways was very similar to that of the Israelites.

Such assessments reveal that the Edomites’ origins can be traced back to the wider Canaanite culture that was dominant in the Levant in the Late Bronze Age. During that time, the Edomites came into contact with the Egyptians and also reencountered the Hebrews. After coming back into contact with the Hebrews, the Edomites seemingly faded from the historical record until the creation of the Kingdom of Israel in the early 1st millennium BCE. The Edomites then played a subservient and clearly inferior role to the Israelites, at least politically, until the time was right and they could make a major play for their longtime rival’s land.