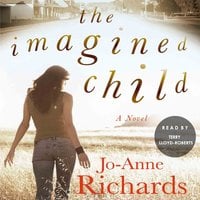 Odette is a scriptwriter for a popular TV soap opera. When she moves to the small Free State town of Nagelaten, she hopes to leave her problems - of family, fraught relationships, and experiences of crime - behind in Joburg. To the dwellers of Nagelaten, Odette appears to be escaping a painful breakup in a place she knows no one - and won't have to share her secrets.

When Odette begins seeing the local engineer, Adriaan, also an outcast in this small town, secrets begin to surface around the murder of Adriaan's wife. Odette's world begins to unravel when her troubled daughter, Mandy, is suspected of killing the baby she was au pairing in the UK and soon comes to live with Odette, who has a secret of her own. It isn't until Mandy befriends a strange man named Wolfie that Odette finally begins to question the mysteries of the small town. Odette is forced to face her mistakes of the past and the truth of a murder long since buried with the dead.

The Imagined Child is a carefully plotted whodunit that combines Jo-Anne's trademark lyrical style with tight suspense and will keep you guessing until the last minute.