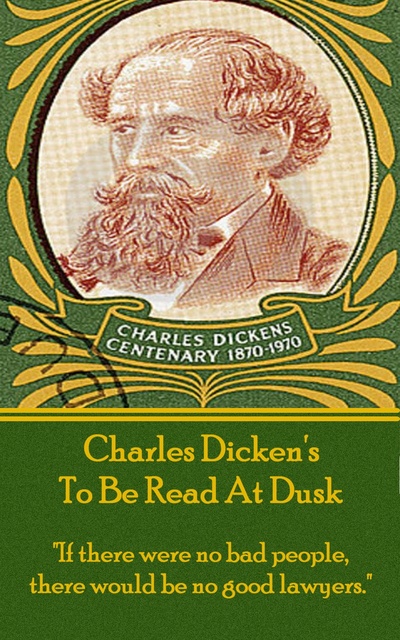 To Be Read At Dusk: "If there were no bad people, there would be no good lawyers."

To Be Read At Dusk: "If there were no bad people, there would be no good lawyers."

To Be Read at Dusk is a very short story by the celebrated Victorian novelist Charles Dickens. Amid the Swiss mountainous region of Saint Bernard, the first-person narrator starts to eavesdrop on a nearby group of men. The sun is setting, giving way to strange thoughts and memories. The group is composed of five couriers from different nationalities, including a stout and talkative German, a Swiss, a Genoese and a Neapolitan. It is the German courier who first makes a comment on the beautiful, yet eerie, scene of the setting sun and the blood-crimson horizon to start a conversation on weird happenings and apparitions. They talk about instances of déjà vu, of omens and visions that mysteriously come true. Other accounts follow telling about encounters with ghosts, revenants and various sorts of strange cases. When they all finish speaking and prepare themselves to depart in silence, a feeling of melancholy and fear prevails. The eavesdropping narrator “looked round, and the five couriers were gone: so noiselessly that the ghostly mountain might have absorbed them into its eternal snows.” By the very end of the narrative, the narrator admits to his readers that he has now become afraid of being left alone in such a place or in any other place.