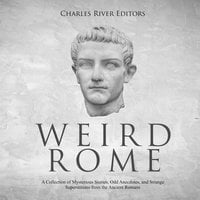 Weird Rome: A Collection of Mysterious Stories, Odd Anecdotes, and Strange Superstitions from the Ancient Romans

The ambitious and fearless emperors who built the legendary Roman Empire from scratch, the broad-shouldered and bronzed gladiators with their iconic plume helmets and glinting swords, and elaborate parties attended by toga-wearing Romans fueled by alcohol, violence, orgies, and other godless acts all paint a picture of Roman life. Indeed, many people are well-versed with these unique scenes of Roman history, but few are familiar with the equally riveting years preceding the dawn of the Roman Republic, and even less people are acquainted with the fabled Seven Hills sitting east of the Tiber River – the core geographical components of Rome, and the very foundations that the Eternal City was built on.

Ancient Rome is understandably an object of enduring fascination, and its legacy still survives today, especially in the West, where Roman architecture, law, and philosophy all influence modern societies. But the Romans were also startlingly different - a deeply superstitious society, they believed in all sorts of omens and magic spells, while their leaders were capable of cruelties that would make a modern war criminal blush. Regular Romans performed strange religious practices, and they engaged in even stranger sexual practices.

Weird Rome: A Collection of Mysterious Stories, Odd Anecdotes, and Strange Superstitions from the Ancient Romans looks at the more bizarre sides of Roman civilization, helping people understand the true nature of Rome and examining aspects that documentaries and museum exhibitions tend to gloss over.