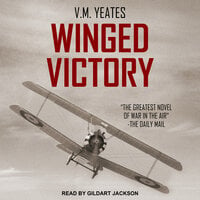 The war on the land is taking to the skies.

Pilot Tom Cundall is ready to take on the enemy in his trusty Camel fighter plane. But as he sees more and more planes shot down in flames, he begins to question the war, and what, or who, he is fighting for.

There is no bitter snarl nor self-pity in this classic novel about the air war of 1914-1918, based very largely on the author's experiences.

Combat, loneliness, fatigue, fear, comradeship, women, excitement-they all are part of a brilliantly told story of war and courage by one of the most valiant pilots of the then Royal Flying Corps.