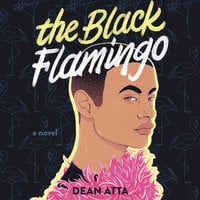 A fierce coming-of-age verse novel about identity and the power of drag, from acclaimed poet and performer Dean Atta. Perfect for fans of Elizabeth Acevedo, Jason Reynolds, and Kacen Callender.

Michael is a mixed-race gay teen growing up in London. All his life, he’s navigated what it means to be Greek-Cypriot and Jamaican—but never quite feeling Greek or Black enough.

As he gets older, Michael’s coming out is only the start of learning who he is and where he fits in. When he discovers the Drag Society, he finally finds where he belongs—and the Black Flamingo is born.

Told with raw honesty, insight, and lyricism, this debut explores the layers of identity that make us who we are—and allow us to shine.

"In this uplifting coming-of-age novel told in accessible verse, Atta chronicles the growth and glory of Michael Angeli, a mixed-race kid from London, as he navigates his cultural identity as Cypriot and Jamaican as well as his emerging sexuality." (Publishers Weekly, "An Anti-Racist Children's and YA Reading List")