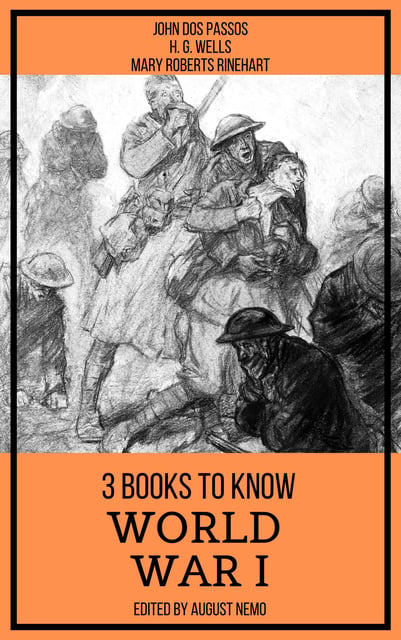 3 books to know World War I

3 books to know World War I

Welcome to the 3 Books To Know series, our idea is to help readers learn about fascinating topics through three essential and relevant books.

These carefully selected works can be fiction, non-fiction, historical documents or even biographies.

We will always select for you three great works to instigate your mind, this time the topic is:World War I.

- The Amazing Interlude by Mary Roberts RinehartThree Soldiers is a 1921 novel by American writer and critic John Dos Passos. It is one of the American war novels of the First World War, and remains a classic of the realist war novel genre.

During August 1914, immediately after the outbreak of the war, British author and social commentator H. G. Wells published a number of articles in London newspapers that subsequently appeared as a book entitled The War That Will End War. Wells blamed the Central Powers for the coming of the war and argued that only the defeat of German militarism could bring about an end to war. Wells used the shorter form of the phrase, "the war to end war", in In the Fourth Year (1918), in which he noted that the phrase "got into circulation" in the second half of 1914. In fact, it had become one of the most common catchphrases of the First World War.

The Amazing Interlude (1918) is a story about Sara Lee Kennedy, an innocent and idealistic nineteen year old American girl from Pennsylvania, who is touched by the plight and suffering of the soldiers battling on the front lines during WWI. Funded by the local women's charity, Sara Lee joins the Red Cross, travels to Europe over her fiancee's objections and meets Henri, an intriguing Belgian spy who helps her setup a soup kitchen near the Belgian front line.

This is one of many books in the series 3 Books To Know. If you liked this book, look for the other titles in the series, we are sure you will like some of the topics.