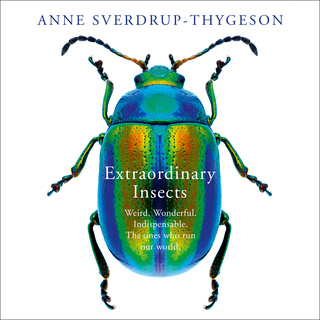 Autor: Anne Sverdrup-Thygeson
Czyta: Kristin Milward
Format: Audiobook & E-book
7H 15M
Angielski
4,25
This enthusiastic, witty, and informative introduction to the world of insects and why we could not survive without them is “a joy” (The Times, London) and “charming...Highlighting them in all their buzzing, stinging, biting glory” (The New York Times Book Review).

Insects comprise roughly half of the animal kingdom. They live everywhere—deep inside caves, 18,000 feet high in the Himalayas, inside computers, in Yellowstone’s hot springs, and in the ears and nostrils of much larger creatures. There are insects that have ears on their knees, eyes on their penises, and tongues under their feet. Most of us think life would be better without bugs. In fact, life would be impossible without them.

Most of us know that we would not have honey without honeybees, but without the pinhead-sized chocolate midge, cocoa flowers would not pollinate. No cocoa, no chocolate. The ink that was used to write the Declaration of Independence was derived from galls on oak trees, which are induced by a small wasp. The fruit fly was essential to medical and biological research experiments that resulted in six Nobel prizes. Blowfly larva can clean difficult wounds; flour beetle larva can digest plastic; several species of insects have been essential to the development of antibiotics. Insects turn dead plants and animals into soil. They pollinate flowers, including crops that we depend on. They provide food for other animals, such as birds and bats. They control organisms that are harmful to humans. Life as we know it depends on these small creatures.

“Delivering a hail of facts with brio and precision” (Nature) Anne Sverdrup-Thygeson shows us that there is more variety among insects than we thought possible and the more you learn about insects, the more fascinating they become. Extraordinary Insects is “a very enthusiastic look at the flying, crawling, stinging bug universe world, and why we should cherish it” (The Philadelphia Inquirer).

The Breath of a Whale

Nature Underfoot: Living with Beetles, Crabgrass, Fruit Flies, and Other Tiny Life Around Us

The Rise and Fall of the Dinosaurs

A Primate's Memoir: A Neuroscientist's Unconventional Life Among the Baboons

Wilding: The Return of Nature to a British Farm

Our Native Bees: North America's Endangered Pollinators and the Fight to Save Them

The Hidden World of the Fox

Never Split the Difference: Negotiating As If Your Life Depended On It

Down to the River and Up to the Trees

Vaquita: Science, Politics, and Crime in the Sea of Cortez