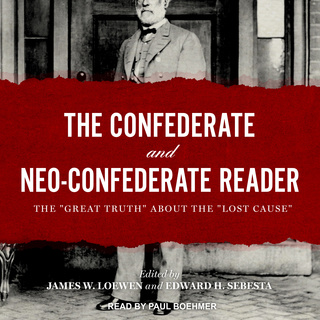 The Confederate and Neo-Confederate Reader: The "Great Truth" about the "Lost Cause"

The Confederate and Neo-Confederate Reader: The "Great Truth" about the "Lost Cause"

Autor: James W. Loewen, Edward H. Sebesta
Czyta: Paul Boehmer
Format: Audiobook
18H 15M
Angielski
3
Most Americans hold basic misconceptions about the Confederacy, the Civil War, and the actions of subsequent neo-Confederates. For example, two thirds of Americans–including most history teachers–think the Confederate States seceded for "states' rights." This error persists because most have never read the key documents about the Confederacy.

These documents have always been there. When South Carolina seceded, it published "Declaration of the Immediate Causes Which Induce and Justify the Secession of South Carolina from the Federal Union." The document actually opposes states' rights. Its authors argue that Northern states were ignoring the rights of slave owners as identified by Congress and in the Constitution. Similarly, Mississippi's "Declaration of the Immediate Causes..." says, "Our position is thoroughly identified with the institution of slavery-the greatest material interest of the world."

The Road to Disunion

The Injustice Never Leaves You: Anti-Mexican Violence in Texas

Fights on the Little Horn

War on the Waters

Blood Moon: An American Epic of War and Splendor in the Cherokee Nation

The Cause of All Nations

A Different Mirror: A History of Multicultural America

Kingdom of Nauvoo: The Rise and Fall of a Religious Empire on the American Frontier