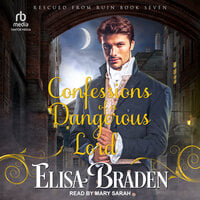 Confessions of a Dangerous Lord

Society knows the affable Earl of Dunston for his flashy waistcoats and rapier wit. Lady Maureen Huxley knows him as Henry Thorpe, her best friend-an irresistibly kissable, strictly platonic friend. Which means her dreams of marriage, motherhood, part-time cookery, and full-time domestic bliss must be fulfilled elsewhere. But after three seasons and a parade of fickle suitors, Maureen's hopes are fading. Worse, she suspects Henry is to blame.

Never trust a man with too many secrets . . .

Years spent hunting his father's murderer through London's dark underworld have honed Henry Thorpe into a deadly blade with one purpose-catching a killer of fathomless evil. Nothing mattered more until Maureen Huxley came along. To keep her safe, he must keep her at arm's length. Yet he can't resist drawing her close, making her laugh, dreaming of doing wicked things to her lush body. Very well, perhaps he also dissuaded some of her suitors. But what's a little deception between friends?

Never provoke a man as dangerous as this one . . .

With his enemy growing bolder and Maureen contemplating marriage to another man, Henry is caught in the crossfire between his mission and his heart. Any move could exact a devastating cost. But losing the woman he loves is one price he refuses to pay.