No place on Earth escaped the nuclear Armageddon that spawned the hellscape known as Deathlands. In a ravaged world where violence and lawlessness rule, a rare breed of hero has emerged. Ryan Cawdor is a lethal fighter who lives by a code of honor and fair play, and that has made him a legend… . Miles beneath the ocean's surface, a decaying redoubt barely protects Ryan and his companions from a watery death. Battling vicious assaults from cyborgs programmed by artificial intelligence to kill them, they're desperate to escape this underwater trap. But above the waves a new threat awaits: a massive predark super ship banished to the seas of Deathlands. Decades of madness have led to civil war between the citizens of the upper and lower decks. Now pawns in a bloody game, Ryan and the other survivors must destroy the ship or face their certain end at sea. 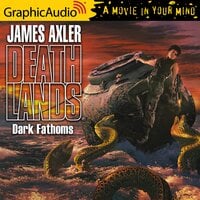