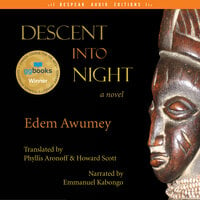 With a nod to Samuel Beckett and Bohumil Hrabal, a young dramatist from a West African nation describes a student protest against a brutal oligarchy and its crushing aftermath. While distributing leaflets with provocative quotations from Beckett, Ito Baraka is taken to a camp where torture, starvation, beatings, and rape are normal. Forced to inform on his friends, whose fates he now fears, and released a broken man, he is enabled to escape to Quebec. His one goal is to tell the story of the protest and pay homage to Koli Lem, a teacher, cellmate, and lover of books, who was blinded by being forced to look at the sun–and is surely a symbol of the nation.

Edem Awumey gives us a darkly moving and terrifying novel about fear and play, repression and protest, and the indomitable nature of creativity.