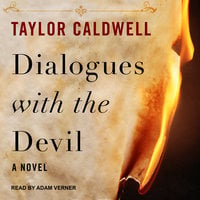 From a #1 New York Times-bestselling author: Lucifer and the Archangel Michael debate the fate of humanity in the final nights before the apocalypse.

Upon the end of days, Lucifer, the Fallen One, that Infernal of Infernals and Murderer of Hope, wonders if his Father will bother to raise another race after Armageddon. After all, he'll only have to tempt them-again-to certain death. Their choice, not his. On God's behalf, Archangel Michael responds. So begins a series of letters between two brothers, at once cordial and combative, about their purpose, their fears, their familial estrangement, and their Father's great folly: the human race.

Equally defensive, unrepentant, objective, and, for a time, amused, they challenge each other on science and spirituality, physical love and emotional love, the crucifixion, and the crimes committed by man. They deliberate the virtues of empathy and vengeance, redemption and punishment, and the laws of the Bible versus its lies. Their civil discourse soon becomes a heated trial of wills.