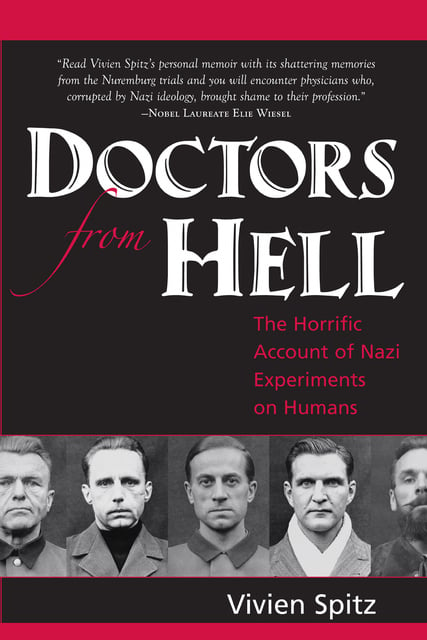 Doctors From Hell: The Horrific Account of Nazi Experiments on Humans

Doctors From Hell: The Horrific Account of Nazi Experiments on Humans

A court reporter for the Nuremberg war crimes trial of Nazi doctors reveals the shocking truth of their torture and murder in this monumental memoir.

Vivien Spitz reported on the Nuremberg trials for the U.S. War Department from 1946 to 1948. In Doctors from Hell, she vividly describes her experiences both in and out of the courtroom. A chilling story of human depravity and ultimate justice, this important memoir includes trial transcripts as well as photographs used as evidence.

The author describes the experience of being in bombed-out, dangerous, post-war Nuremberg. She recounts dramatic courtroom testimony and the reactions of the defendants to the proceedings. Witnesses tell of experiments in which they were deprived of oxygen; frozen; injected with malaria, typhus, and jaundice; subjected to the amputation of healthy limbs; forced to drink seawater for weeks at a time; and other horrors.

Doctors from Hell is a significant addition to the literature on World War II and the Holocaust, medical ethics, human rights, and the barbaric depths to which human beings can descend.

“In this personal account of her service in the Nuremberg War Crimes Trials, Vivien Spitz continues to contribute to the cause of human rights.” —President James Carter