He stopped, hovering above her lips, giving her the opportunity to back away… create space between them. Instead, she leaned into him, met his kiss. The moments evaporated as he held her, a touch as light as if she were a cherry blossom he could crush.

Get caught up in romance and suspense with this novella from award-winning author Cara Putman.

Things were business as usual for family law attorney Ciara Turner, until she walked into her mentor’s office to find the judge had been murdered. To make things worse, the emotional moments were witnessed by Ciara’s nemesis, opposing counsel David Evans - the man she once thought she’d spend the rest of her life with.

David can’t walk away from the murder investigation. Judge Palmer was the only one who believed in him enough to give the boy from the wrong side of the tracks a fighting chance. But his amateur sleuthing keeps him crossing paths with Ciara and he can’t help but admire her passion for her clients, even if they are often at odds across the judgment table.

As David and Ciara get closer to discovering who killed Judge Palmer, their old feelings reignite. But the investigation takes an unexpected turn, can they trust each other enough to push for the truth? And will their rekindled relationship survive the aftermath? 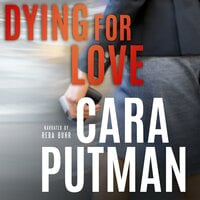