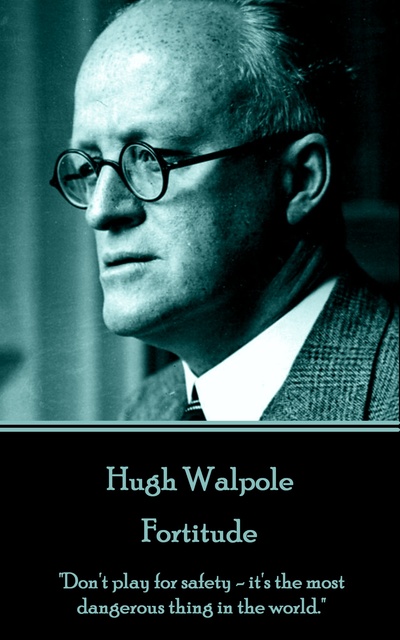 Sir Hugh Seymour Walpole, CBE was born in auckland, New Zealand, on March 13th, 1884. His parents had moved to New Zealand in 1877, but his mother, Mildred, unable to settle there, eventually persuaded her husband, Somerset, an anglican clergyman, to accept another post, this time in New York in 1889. Walpole's early years involved being educated by a Governess until, in 1893, his parents decided he needed an English education and the young Walpole was sent to England. He first attended a preparatory school in Truro. He naturally missed his family but was reasonably happy. A move to Sir William Borlase's Grammar School in Marlow in 1895, found him bullied, frightened and miserable. The following year, 1897, the Walpole's returned to England and Walpole was moved to be a day boy at Durham School. His sense of isolation increased. His refuge was the local library and reading. From 1903 to 1906 Walpole studied history at Emmanuel College, Cambridge and there, in 1905, had his first work published, the critical essay "Two Meredithian Heroes". Walpole was also attempting to cope with and come to terms with his homosexual feelings and to find "that perfect friend". After a short spell tutoring in Germany and then teaching French at Epsom in 1908 he found the desire to fully immerse himself in the literary world. He moved to London to become a book reviewer for The Standard and to write fiction in his spare time. In 1909, he published his first novel, The Wooden Horse. The book received good reviews but sold little. Better was to come in 1911 when he published Mr Perrin and Mr Traill. In early 1914 Henry James wrote an article for The Times Literary Supplement surveying the younger generation of British novelists. Walpole was greatly encouraged that one of the greatest living authors had publicly ranked him among the finest young British novelists. As war approached, Walpole realised that his poor eyesight would disqualify him from service and accepted an appointment, based in Moscow, reporting for The Saturday Review and The Daily Mail. Although allowed to visit the front in Poland, these dispatches were not enough to stop hostile comments at home that he was not 'doing his bit' for the war effort. Walpole was ready with a counter; an appointment as a Russian officer, in the Sanitar. He explained they were "part of the Red Cross that does the rough work at the front, carrying men out of the trenches, helping at the base hospitals in every sort of way, doing every kind of rough job". During a skirmish in June 1915 Walpole rescued a wounded soldier; his Russian comrades refused to help and this meant Walpole had to carry one end of a stretcher, dragging the man to safety. He was awarded the Cross of Saint George. By late 1917 it was clear to Walpole, and the authorities, that his work was at an end. In London Walpole joined the Foreign Office and remained there until resigning in February 1919. For his wartime work he was awarded the CBE in 1918. Walpole continued to write and publish and now also began a career on the highly lucrative lecture tour in the United States. In 1924 Walpole moved to a house, Brackenburn, near Keswick in the Lake District. Although he maintained a flat in Piccadilly, Brackenburn was to be his main home for the rest of his life. At the end of 1924 Walpole met Harold Cheevers, who soon became his friend and constant companion and remained so for the rest of his life; "that perfect friend". Hollywood, in the shape of MGM, invited him in 1934 to write the script for a film of David Copperfield. He also had a small acting role in the film. In 1937 Walpole was offered a knighthood. He accepted although Kipling, Hardy, Galsworthy had all refused. "I'm not of their class... Besides I shall like being a knight," he said. Unfortunately his health was undermined by diabetes made worse by the frenetic pace of his life. Sir Hugh Seymour Walpole, CBE died of a heart attack at Brackenburn, aged 57 on June 1st, 1941. He was buried in St John's churchyard in Keswick.