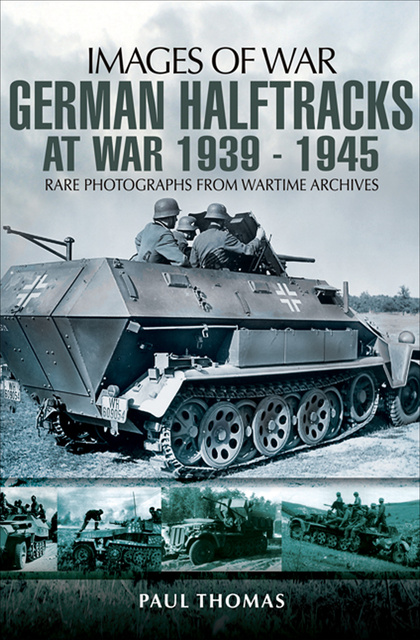 The author of the bestselling Panzer IV at War delivers a highly illustrated look at “a key element in the German Blitzkrieg” during the Second World War (HistoryOfWar. org).

In the aftermath of the Great War, which saw the introduction of the tank, the more far sighted military leaders realized that the future of warfare hinged on a balance of mobility, firepower and protection. Tanks would need to be accompanied into battle by supporting arms, specifically infantry, artillery and engineers. An all fully-tracked field army was thought to be too expensive, so the semi-tracked support vehicle (commonly called a halftrack) was born.

The halftrack concept was embraced by France, the US and most notably Germany. The Germans commissioned numerous types of half-tracked tractors, which were classified by the weight of their towed load. These vehicles were designated Sonderkraffarzeug (special motorized vehicle), abbreviated as Sd. Kfz.

These front-wheel steering vehicles with tracked drive transformed the fighting quality of the armored divisions. They carried the infantry alongside the advancing panzers and brought guns and pontoon-bridge sections. The halftrack also became the preferred reconnaissance vehicle.

This latest addition to the highly successful and collectable Images of War series has a superb collection of rare images, supported by detailed captions and text, of the many Sd. Kfz variants in diverse theatres of war. It is worth reflecting that, without half-tracks, there could have been no Blitzkrieg.