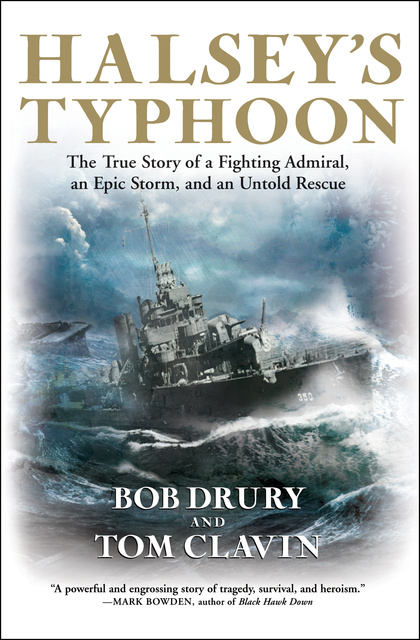 Halsey's Typhoon: The True Story of a Fighting Admiral, an Epic Storm, and an Untold Rescue

Halsey's Typhoon: The True Story of a Fighting Admiral, an Epic Storm, and an Untold Rescue

This account of a disaster at sea during World War II is “a powerful and engrossing story of tragedy, survival, and heroism” (Mark Bowden, author of Black Hawk Down).

In the final days of 1944, Admiral William “Bull” Halsey is the Pacific theatre’s most popular and colorful naval hero. After a string of victories, the “Fighting Admiral” and his thirty-thousand-man Third Fleet are charged with protecting General MacArthur’s flank during the invasion of the Philippine island of Mindoro. But in the midst of the landings, Halsey attempts a complicated refuelling manoeuvre—and unwittingly drives his 170 ships into the teeth of a massive typhoon.

Halsey’s men find themselves battling ninety-foot waves and 150 mph winds. Amid the chaos, three ships are sunk and nearly nine hundred sailors and officers are swept into the Philippine Sea. For three days, small bands of survivors battle dehydration, exhaustion, sharks, and the elements, awaiting rescue. It will be up to courageous lieutenant commander Henry Lee Plage to defy orders and sail his tiny destroyer escort, the USS Tabberer, back into the storm to rescue drifting sailors.

Revealing a little-known chapter of WWII history in absorbing detail, this is “a vivid tale of tragedy and gallantry at sea. ” (Publishers Weekly).