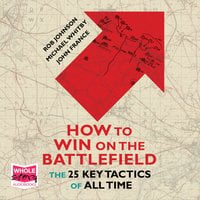 How to Win on the Battlefield: The 25 Key Tactics of All Time

Written by leading experts, How to Win on the Battlefield will prove indispensable listening for historians, military enthusiasts and business leaders.

How can you off-balance your enemy? When is the best moment to deliver a counter-attack? What is the effect of shock action or defence in depth? Certain tactical concepts have stood the test of time. This ground-breaking book examines, in a series of case studies, 25 of the key tactics that have achieved victory through the ages. Drawing on examples of battles from around the globe, on land, at sea and in the air, and across history, the authors reveal the enduring value of each tactic in clear and compelling descriptions and analysis.

General Robert E. Lee, although heavily outnumbered achieved a remarkable victory through an audacious flanking manoeuvre at Chancellorsville in 1863; the same bold move had been used over 600 years before by the king of France at Bouvines. For the Parthian general Surenas at Carrhae in 53 BC and again for Kitchener at Omdurman in 1989, an overwhelming concentration of firepower ensured a decisive outcome, while drawing the enemy led to victory both for Saladin at Hattin in 1187 and for the Russians against Napoleon in 1812. The book examines how Allied armies seized and retained the initiative through the airborne landings in Normandy in 1944, and how Soviet General Zhukov pierced enemy lines and penetrated in depth using Blitzkriegtactics in Mongolia in 1939.

'A useful and timely reminder of the theory of tactics that have evolved during the long history of warfare' - General Sir Michael Rose, former Adjutant General of the British Army and author of Washington's War

'A riveting study of tactics ancient and modern' - Richard Holmes