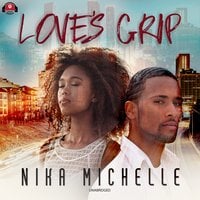 When Daisha’s boyfriend, Raekwan, takes his violent, jealous antics to the next level, a mysterious stranger intervenes, taking Daisha to his place to nurse her wounds. Even though she sneaks out the next morning. Daisha can’t stop thinking about him; but with her history of bad relationships with men and with her estranged mother, she knows that she should only be concerned with her own survival. In time, she will realize that he has a strong grip on her emotionally, and she has no control.

Tyreek, a.k.a. Pistol, witnesses Daisha’s assault and suddenly finds himself caring about a stranger. His life of crime has toughened him, but his thoughts are consumed with her safety. On the run from the feds, he knows that trust and loyalty are rarely given in the streets. After fleeing to Atlanta, he pulls off a murder that sets off a domino effect of events he never sees coming.

There’s a street war brewing, but Pistol and Daisha are fighting a battle in their hearts. Despite all the drama and bloodshed surrounding them, they can’t seem to deny their true feelings. Will they make it out alive to pursue the prospect of a real hood love, or will it all be consumed by the fate of the streets?