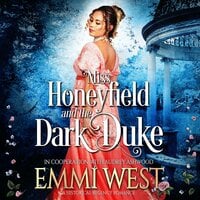 Miss Honeyfield and the Dark Duke

They say he has a black heart.

They say he is cold, unscrupulous, and dangerous.

They say he killed a woman out of jealousy.

Robert Beaufort, the Duke of Scuffold, has returned to the castle of his forefathers. To be seen with him means the ruin of any woman’s reputation. When Miss Minerva Honeyfield stumbles upon the duke in an enchanted glade deep in the forest, it is too late to heed her aunt’s warnings.

Her indecent encounter is the most exciting event that has ever happened to Minerva – and also the most dangerous one. Despite knowing that this man is ominous and menacing, Minerva is unable to shield herself from her fascination with the Duke of Scuffold.

While Minerva struggles to resign herself to longing for a man who will destroy her name and possibly even threaten her life, her mother suddenly falls into mortal danger – and all indications point to the dark duke.

Has Minerva truly lost her heart to a ruthless murderer?

Romantic – suspenseful – mysterious. A classical historical romance novel that takes place in the shimmering Regency era. Perfect for readers who like their heroes to be daring, and their heroines to be courageous and a little bit adventurous.