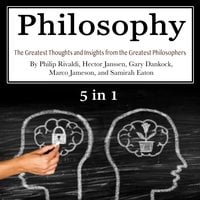 This is a 5-book combo with the following titles in it:

Title 1: In this book, you will find information about five different philosophers, some of them well-known, others less. But all of them had a significant impact on the ancient world and how people thought, as well as some of our modern-day ideas.

The first in line is Marcus Aurelius, a stoic emperor who reigned with righteousness and justice, according to historical records.

Title 2: What are the four virtues of stoicism?

In this book, you will find fascinating thoughts on courage, temperance, justice, and wisdom. We will touch on these topics and help you understand why they are so important. This can make a huge difference in your life.

Stoicism can also help people react better to each other in family relationships. With the virtues described, great improvements can be made in the way we interact with each other. This is the central theme of most of this guide.

Title 3: Today, we will take a look at the skeptical movement and ponder its significance, development, and application. This movement is worldwide and has been acknowledged by prominent scholars and theorists.

Title 4: What makes someone a critical thinker?

The attributes of such a person are elaborately described in this book. Alongside with that, the book highlights the many benefits of critical thinking, an often-neglected brain skills society needs to improve on.

Title 5: Some people get it all wrong when it comes to understanding the intricate depths of emotional intelligence and all that pertains to it. What are some of the misconceptions people believe in? We will explore that today.