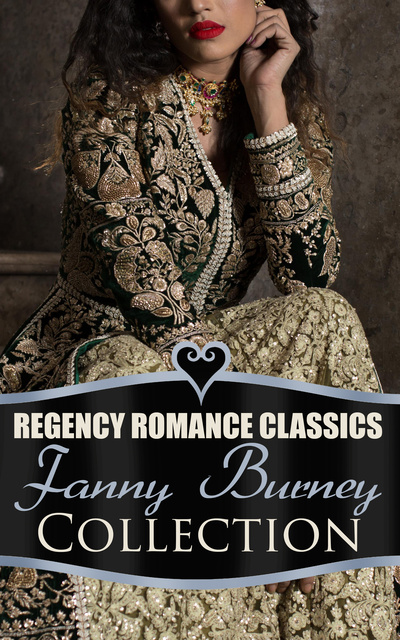 E-artnow presents to you the anthology of Regency Classics, Fanny Burney edition. This volume includes her complete novels, including the extensive biography of this extraordinary author:
Frances Burney (1752-1840) was an English satirical novelist, diarist and playwright. She is best known for her novels Evelina, Cecilia, Camilla and The Wanderer. Burney's novels explore the lives of English aristocrats, and satirize their social pretensions and personal foibles, with an eye to larger questions such as the politics of female identity. She has gained critical respect in her own right, but she also foreshadowed such novelists of manners with a satirical bent as Jane Austen and Thackeray.
Content:
Evelina
Cecilia
Camilla
The Wanderer
The Life and Work of Fanny Burney by A. Dobson

"Evelina" is the unacknowledged, but legitimate daughter of a dissipated English aristocrat, thus raised in rural seclusion until her 17th year. Through a series of humorous events that take place in London and the resort town of Hotwells, near Bristol, Evelina learns to navigate the complex layers of 18th-century society and earn the love of a distinguished nobleman.
"Cecilia" is the tale about the trials and tribulations of a young upper class woman who must negotiate London society for the first time and who falls in love with a social superior.
"Camilla" deals with the matrimonial concerns of a group of young people: Camilla Tyrold, her sisters Lavinia and Eugenia, and their cousin, the beautiful Indiana Lynmere. Focal is the love affair between Camilla herself and her eligible suitor, Edgar Mandlebert. They have many hardships, however, caused by misunderstandings and mistakes, in the path of true love.
"The Wanderer" is the historical tale with Gothic overtones set during the 1790s about a mysterious woman who attempts to support herself while hiding her identity. The novel focuses on the difficulties faced by women as they strive for economic and social independence.