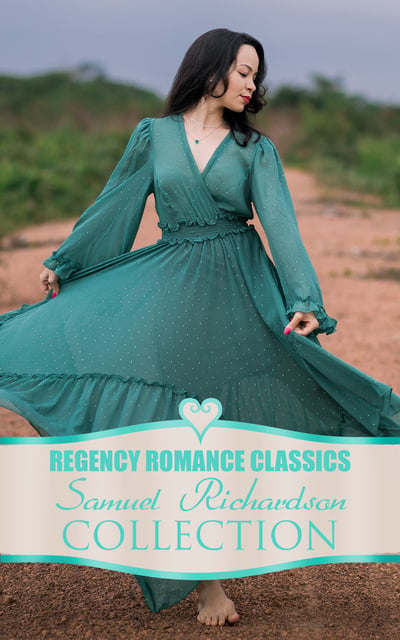 E-artnow presents to you the anthology of Regency Classics, the Samuel Richardson edition. This volume includes his complete novels, including:
Pamela
Clarissa
Sir Charles Grandison

"Clarissa: The History of a Young Lady" is regency bestseller, the classic of English literature.
It tells the tragic story of a young woman, whose quest for virtue is continually thwarted by her family. The Harlowes are a recently wealthy family whose preoccupation with increasing their standing in society leads to obsessive control of their daughter, Clarissa, who runs away from home to find love and happiness. However things start turning south soon.
A best-seller of its time, "Pamela" tells the story of a fifteen-year-old maidservant named Pamela Andrews, whose employer, Mr. B, a wealthy landowner, makes unwanted and inappropriate advances towards her after the death of his mother. Pamela was an early commentary on domestic violence and brought into question the dynamic line between male aggression and a contemporary view of love. Moreover, Pamela, despite the controversies, was able to shed light on social issues that transcended the novel for the time such as gender roles, early false-imprisonment, and class barriers present in the eighteenth century.
The novel "Sir Charles Grandison" begins with the character of Harriet Byron leaving the house of her uncle, George Selby, to visit Mr. and Mrs. Reeves, her cousins, in London. She is an orphan who was educated by her grandparents, and, though she lacks parents, she is heir to a fortune of fifteen thousand pounds, which causes many suitors to pursue her. In London, she is pursued by three suitors: Mr. Greville, Mr. Fenwick, and Mr. Orme. This courtship is followed by more suitors: Mr. Fowler, Sir Rowland Meredith, and Sir Hargrave Pollexfen. The final one, Pollexfen, pursues Byron vigorously, which causes her to criticise him over a lack of morals and decency of character. However, Pollexfen does not end his pursuits of Byron until she explains that she could never receive his visits again. Pollexfen, unwilling to be without Byron, decides to kidnap her while she attended a masquerade ball at the Haymarket.

Samuel Richardson (1689-1761) was a beloved English writer, extremely popular in the time of Regency. He is best known for his novels: Pamela; or, Virtue Rewarded (1740), Clarissa: Or the History of a Young Lady (1748) and The History of Sir Charles Grandison (1753).