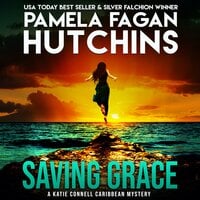 When fate hands tightly wound attorney and certified hot mess Katie Connell an unexpected second chance in the Caribbean, will she find herself, or will a killer find her?

"Katie is the first character I have absolutely fallen in love with since Stephanie Plum!" -- Stephanie Swindell, Bookstore Owner

Texas attorney and sloppy drinker Katie Connell’s career just melted down before her eyes. After very public failure during a doomed celebrity trial and a heart-wrenching breakup, she avoids rehab by retreating to the tropical island where her parents tragically died. But when she arrives, it becomes obvious that her parents’ supposed accident was cold and calculated. As Katie sorts through the clues, she gets help from an unexpected source: a spirited house named Annalise. Between the kindred ghost, a local singing sensation, and a handsome chef, the quirks of the island throw the former attorney for a major loop. Can Katie pick up the pieces of her life and solve her parents’ murder as part of her fresh new start?

The Katie books have over 4000 reviews and a 4.5-star average. Available in digital, print, and audiobook.

Saving Grace is the first standalone book in the Katie trilogy and Book #1 within the What Doesn’t Kill You romantic mystery series.