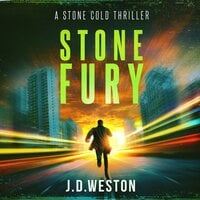 An ex-assassin on a mission. Innocent girls in danger. He’s about to cross another name off his hit list.

After years of killing for the wrong side of the law, ex-hitman Harvey Stone is finally putting his bloody skills to good

use. While he’s not hunting down bad guys with his dark ops organized crime squad, he’s rounding up the men responsible for his sister’s murder. His team’s mission to retrieve twelve abducted girls gets personal when Stone realizes the ringleader has a prime spot on his revenge hit list.

But as his team digs deeper, he’s horrified to discover that the sex traffickers offer an even more brutal service to satisfy their clients’ darkest desires. With time running out, Harvey breaks off from his team to bring the criminal mastermind to swift justice. But without backup, one wrong move could end the mission, his quest for revenge, and his life…

Buy Stone Fury to brace yourself for an adrenaline-fueled quest for revenge today!