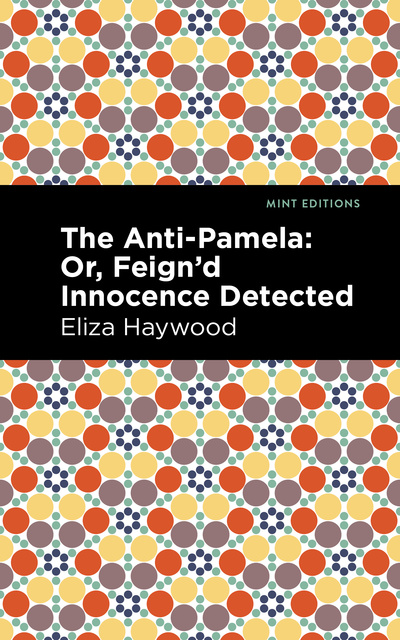 The Anti-Pamela: Or, Feign'd Innocence Detected (1741) is a novel by Eliza Haywood. Blending tragedy and comedy, Haywood explores the intersection of gender and class to reveal how women perform and experience desire. Written in response to Samuel Richardson’s Pamela; Or, Virtue Rewarded, a novel in which a young girl resists the advances of her wealthy employer and eventually marries him honorably, Haywood’s novel flips the portrayal of static feminine desire on its head.

Unlike Pamela, her protagonist is an anti-heroine who wields her sexuality for the purpose of social mobility, showing resilience and determination despite her repeated failures. Syrena Tricksy knows what she wants from men. To get it, she disguises herself as an unmarried aristocrat, a mistress, a widow, and a libertine, each time in pursuit of a wealthy nobleman to marry. Playing these parts with ease, she frequently gets in her own way, failing at the last moment through carelessness and greed.

Resourceful and independent, Syrena is a character at odds with the stereotypical portrayal of feminine sexuality. She may not be perfect, but she is never passive. As a parody of Samuel Richardson’s popular novel of morality, The Anti-Pamela: Or, Feign'd Innocence Detected lampoons the unrealistic character at the heart of Pamela, a woman who gets what she wants through virtue alone.

With a beautifully designed cover and professionally typeset manuscript, this edition of Eliza Haywood’s The Anti-Pamela: Or, Feign'd Innocence Detected is a classic of English literature reimagined for modern readers.