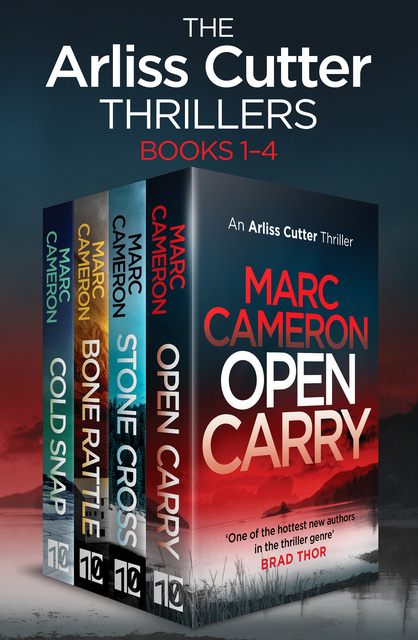 Open Carry: After enlisting in the military and fighting in the Middle East, US Marshal Arliss Cutter is sent to the icy wastelands of southeast Alaska. Three people have disappeared on Prince of Wales Island. Two are crew members of the reality TV show, Alaska Adventure Jobs. The other is a Tlingit Indian girl who had the misfortune of witnessing their murders. Cutter’s job is to find the bodies, examine the crew’s footage for clues, and track down the men who killed them. Easier said than done. Especially when the whole town is hiding secrets, the trail leads to a dead end – and the hunter becomes the prey.

Stone Cross: Winter comes early to the rural native community of Stone Cross, Alaska – and so does hunting season. But Arliss Cutter has come here for a very different game. A federal judge is receiving death threats and refuses protection. Cutter and his deputy Lola Teariki have been assigned to shadow him on his trip to this icy outland. When Cutter and Lola arrive, the village is already gripped with fear. A young couple has disappeared and their handyman is found dead. To make matters worse, a dense fog has descended on the region, isolating the town from civilization. With the judge’s life still at risk, and two people still missing, Cutter and Lola have their work cut out for them…

Bone Rattle: In Juneau, a young archaeologist is sent to protect the ancient burial sites uncovered by an Alaskan gold mining company. He never returns. In Anchorage, a female torso – minus head, hands, and feet – is washed ashore near a jogging trail by the airport. It is not the first. At Alaska’s Fugitive Task Force, Arliss Cutter and deputy Lola Teariki are pulled from their duties and sent to a federal court in Juneau to keep track of sequestered jurors in a high-profile drug trial. When a prosecuting attorney is murdered – and a reporter viciously attacked – Cutter realizes they’re dealing with something darker. The truth lies deep within the ancient sites and precious mines of this isolated land – and inside the cold hearts of those who would kill to hide its secrets.

Cold Snap: After an early spring thaw on the Alaskan coast, Anchorage police discover a gruesome new piece of evidence in their search for a serial killer – a dismembered human foot. In the remote northern town of Deadhorse, Deputy US Marshal Arliss Cutter escorts four very dangerous handcuffed prisoners onto a small bush plane. He’s expecting a routine mission and a nonstop flight. But when the plane goes down in the wilderness, the prisoners murder the pilot and torch the plane. Back in Anchorage, deputy Lola Teariki has traced the dismembered foot to a missing girl and the serial psychopath who slaughtered her – one of the prisoners on Cutter's flight. With no means of communication, Cutter will have to use all his skills if he is to survive the harsh Alaskan wilderness and an angry killer on the loose…

This bone-chilling thriller series shows the desperate measures that must be taken to survive Alaska’s icy heart, perfect for fans of Lee Child, James Swallow and Harlan Coben.

‘One of the hottest new authors in the thriller genre.’ Brad Thor

‘Impossible to put down. I only have a few authors I regard as the best, and Marc Cameron is right there close to the top.’ Reader Review⭐⭐⭐⭐⭐