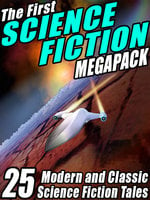 Hours of great reading await, with tales from some of the 20th century's most renowned science fiction authors, Here are 25 science fiction stories (plus a bonus short-short):

CAPTIVES OF THE FLAME, by Samuel R. Delany

SHIPWRECK IN THE SKY, by Eando Binder

THE NEXT LOGICAL STEP, by Ben Bova

YEAR OF THE BIG THAW, by Marion Zimmer Bradley

LIGHTER THAN YOU THINK, by Nelson Bond

AND ALL THE EARTH A GRAVE, by C. C. MacApp

THE MAN WHO HATED MARS, by Randall Garrett

JUBILEE, by Richard A. Lupoff