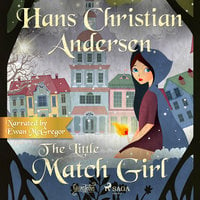 Ewan McGregor reads "The Little Match Girl", a story about a poor little girl who is sent by her parents to sell matches in the street. It is Christmas Eve and it is very cold, but she dares not return home empty-handed. Instead, to try and warm herself ups bit, she lights match after match, and the glow of each reveals an extraordinary, but ephemeral, vision.

Ewan McGregor is a Scottish actor, most famous his roles in "Trainspotting", "Moulin Rouge!" and the "Star Wars" franchise.