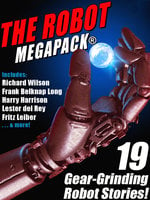 This volume collects 19 stories of robots in their many guises. Some obey Asimov’s 3 Rules of Robotics. Some are of alien design. Some serve mankind. And some…don’t. All are great reading. Included are:

HAVE IT YOUR OWN WAY, by Richard Wilson

A BAD DAY FOR SALES, by Fritz Leiber

THE SPECTACLES, by Frank Belknap Long

MADE TO MEASURE, by William Campbell Gault

A POUND OF CURE, by Lester del Rey

THE ROBOT MEN OF BUBBLE CITY, by Rog Phillips

HOW TO MAKE FRIENDS, by Jim Harmon

NOT QUITE HUMAN, by Emil Petaja

THE LAST OF THE MASTERS, by Philip K. Dick

THE CREATURE FROM CLEVELAND DEPTHS, by Fritz Leiber

THE WORLD OF WULKINS, by Frank Belknap Long

ROBOTS SHOULD BE SEEN, by Lester del Rey