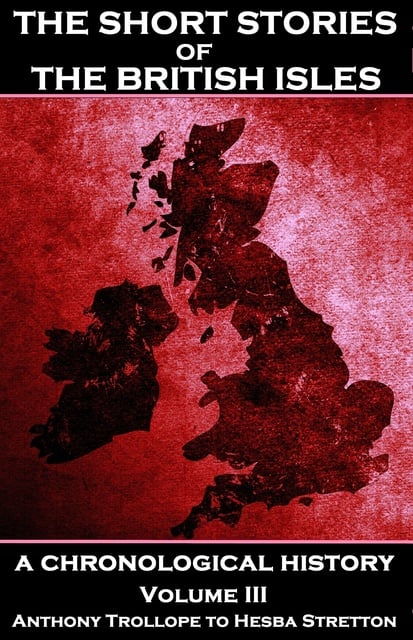 The Short Stories of the British Isles: Volume 3 – Anthony Trollope to Hesba Stretton

The Short Stories of the British Isles: Volume 3 – Anthony Trollope to Hesba Stretton

These British Isles, moored across from mainland Europe, are more often seen as a world unto themselves. Restless and creative, they often warred amongst themselves until they began a global push to forge a World Empire of territory, of trade and of language.

Here our ambitions are only of the literary kind. These shores have mustered many masters of literature. So this anthology’s boundaries includes only those authors who were born in the British Isles - which as a geographical definition is the UK mainland and the island of Ireland - and wrote in a familiar form of English.

Keeping to a chronological order helps us to highlight how authors through the ages played around with characters and narrative to achieve distinctive results across many scenarios, many styles and many genres. The short story became a sort of literary laboratory, an early disruptor, of how to present and how to appeal to a growing audience as a reflection of social and societal changes. Was this bound to happen or did a growing population that could read begin to influence rather than just accept?

Now authors began to offer a wider, more diverse choice from social activism and justice – and injustice to cutting stories of manners and principles. From many forms of comedy to mental meltdowns, from science fiction to unrequited heartache. If you can imagine it an author probably wrote it.

At the end of the 19th Century bestseller lists and then prizes, such as the Nobel and Pulitzer, helped focus an audience’s attention to a books literary merit and sales worth. Previously coffeehouses, Imperial trade, unscrupulous overseas printers ignoring copyright restrictions, publishers with their book lists as an appendix and the gossip and interchange of polite society had been the main avenues to secure sales and profits.

This collection has a broad sweep and an inclusive nature and whilst you will find gems by D H Lawrence, G K Chesterton, Anthony Trollope, Oscar Wilde, Rudyard Kipling, Robert Louis Stevenson, Bram Stoker and many, many others you’ll also find oddballs such as Lewis Carroll and W S Gilbert. Take time to discover the black humour of Violet Hunt, the short story craft of Edith Nesbit and Amy Levy, and ask why you haven’t read enough of Ella D’Arcy, Mary Butts and Dorothy Edwards.

Track Listing of Volume 3: Malachi's Cove by Anthony Trollope; Napolean and the Spectre by Charlotte Bronte; The Knitted Collar by Mary Anne Hoare; The Lifted Veil by George Eliot; The Dream Woman by Wilkie Collins; Stephen Archer by George MacDonald; Frida or The Lover's Leap by R D Blackmore; The Last House in C Street by Dinah Craik; A Story of a Wedding Tour by Margaret Oliphant; The Gospel of Content by Frederick Greenwood; The Phantom Coach by Amelia Edwards; The Blank Cheque by Lewis Carroll; Photography Extraordinary by Lewis Carroll; The Ghost in the Clock Room Hesba Stretton (also known as Sarah Smith);