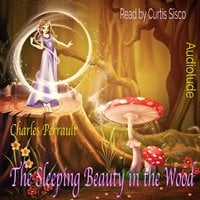 The Sleeping Beauty in the Wood

The Sleeping Beauty in the Wood by Charles Perrault is a classic French fairytale involving a beautiful princess, a sleeping enchantment, and a handsome prince.

"There were formerly a king and a queen, who were so sorry that they had no children; so sorry that it cannot be expressed. They went to all the waters in the world; vows, pilgrimages, all ways were tried, and all to no purpose. At last, however, the Queen had a daughter. There was a very fine christening; and the Princess had for her godmothers all the fairies they could find in the whole kingdom (they found seven), that every one of them might give her a gift, as was the custom of fairies in those days. By this means, the Princess had all the perfections imaginable. After the ceremonies of the christening were over, all the company returned to the King's palace, where was prepared a great feast for the fairies. There was placed before every one of them a magnificent cover with a case of massive gold, wherein were a spoon, knife, and fork, all of pure gold set with diamonds and rubies. But as they were all sitting down at table they saw come into the hall a very old fairy, whom they had not invited, because it was above fifty years since she had been out of a certain tower, and she was believed to be either dead or enchanted. The King ordered her a cover, but could not furnish her with a case of gold as the others, because they had only seven made for the seven fairies. The old Fairy fancied she was slighted, and muttered some threats between her teeth. One of the young fairies who sat by her overheard how she grumbled; and, judging that she might give the little Princess some unlucky gift, went, as soon as they rose from table, and hid herself behind the hangings, that she might speak last, and repair, as much as she could, the evil which the old Fairy might intend."